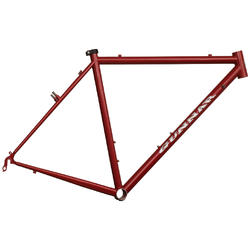 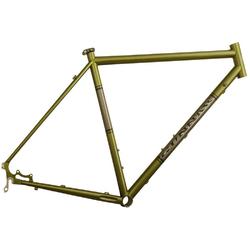 Gunnar Hyper-X Frame
$974.99
Gunnar is more than ready for any cross race or commute with their Hyper-X ... 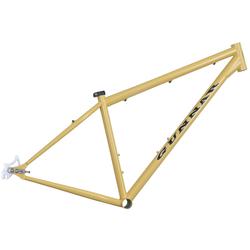 Gunnar's history is really a continuation of the Schwinn Paramount history. The Paramount, Schwinn's crown jewel, set the standard for American bike building for most of the latter 20th century. Most of the Paramounts were built in Schwinn's Chicago factory. When that factory closed in the early 1980's, Schwinn decided to build a facility dedicated not only to crafting bikes of legendary repute, but also to innovation and design.

Marc Muller, a young builder from Chicago, had been selected to lead the effort. The factory, located in Waterford, Wisconsin, was opened in 1981 to very limited production, which grew dramatically throughout the 1980's. The operation, known as Paramount Design Group (PDG), developed a wide variety of innovations in bike design, such as vertical dropouts, single-bend chainstays, oversize tubing, dedicated tri bikes, full-suspension bikes and more.

In the early 90's, when Schwinn was sold, Marc Muller and Richard Schwinn decided to purchase the factory equipment and continue building those legendary bikes. For the first year, the new business, Waterford Precision Cycles, continued building Paramounts, while at the same time, it developed its own Waterford designs, starting with the 1200 road racing bike, but flowering into the wide range of designs, such as sport touring and full touring models.

Waterford supplemented its own brand by building bikes for other brands. Paramounts were the first example of this, but during the first year, Waterford also began building BMX bikes for Standard Byke Company, developing expertise in TIG welding. Waterford earned other customers, including Rivendell and Salsa, among others.

In 1998, having established their own reputation for design and craftsmanship, Waterford introduced the Gunnar line of bikes, borrowing the name from the trusty shop dog. Gunnar was trained as a hunting dog but turned out to like the hunters a lot more than the hunt. He made himself useful around the factory as a greeter though. Whenever someone would show up he'd meet them and guide them to the front door. He also accompanies everyone on factory tours.

As they were designing bikes, it turned out that a lot of the things they wanted out of the bikes were things that they already got from their friend Gunnar: reliability, discipline, speed, strength, friendliness and simplicity. So it's only natural that Gunnar came to symbolize their effort and became the name of their bikes.

We're a proud Gunnar dealer. We love their rich history, friendly people and precision craftsmanship. Check out our Gunnar bicycles. We're sure you'll love them too!